One of the favourite and most appreciated motives of Ed Hopper were lighthouses; he painted them with delight, insistence and a deep empathy toward their look, their function and their isolation, to the point that, after her wife Josephine and plain houses, these buildings were his most depicted “models”. Surely because he identified with them in several ways.

She, Josephine Verstille Nivison –”Jo” Hopper–, who was a promising artist in her own right before she disappeared into Hopper’s shadow, wrote that “his lighthouses are self-portraits.” … It was not the kindest comparison, since she was referring not only to his tall and stiff figure, but also to his loneliness, closeness and distant personality. Several times she said he had an impenetrable ego. Thus, Hopper’s lighthouses are most representative among all of his artwork.

Years ago, I needed a long while, many searches and accurate observations to find out all the paintings with lights that Hopper made; and an even longer time to precisely identify each one of them (or almost), get the necessary information and finally understand that he only illustrated eight real lights –all located in two states of New England; the ones that he knew best: Massachusetts and Maine–.

The most depicted of them all is Cape Elizabeth Light –also known as Two Lights– : a lighthouse in Cape Elizabeth, at the south-western entrance to Casco Bay in Cumberland County, Maine. Only the eastern tower of the two that made up the light station until 1924 was active when he went there the first time: 1927 (it is still active nowadays). The western tower was deactivated, but it is standing and is privately owned.

These are some basic data:

Hopper painted the eastern tower many times. I show here six beautiful watercolours and two oils from 1927 to 1935, which have remained as some of the most divulgated works of this artist (a few have been reproduced in postal stamps, posters, tourism guides, book covers…, and advertisements of many kinds). 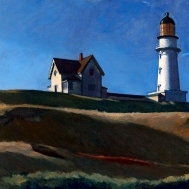 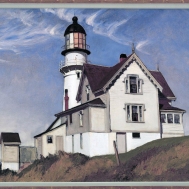 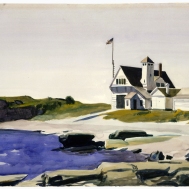 Here they are in full:

The Cleveland Museum of Art, Ohio, USA (not on view)

The Metropolitan Museum of Art, New York, NY, USA (not on view)

After “Two-Lights”, Hopper second most depicted was Portland Head Light; a historic lighthouse also located in Cape Elizabeth, Maine. The light station sits on a head of land at the entrance of the primary shipping channel into Portland Harbour, which is within Casco Bay in the Gulf of Maine. Completed in 1791, it is the oldest lighthouse in the state of Maine.

These are some basic data:

The light station is now automated, and the tower, beacon, and foghorn are maintained by the United States Coast Guard, while the former lighthouse keepers’ house is a maritime museum.

I know of five works showing this light and the adjoining buildings –all are watercolours from the period 1927-29–, but I cannot say if Hopper painted them more times.

The nearest lighthouse to Hopper’s summer residence in South Truro is Highland Light (previously known as Cape Cod Light); still an active lighthouse on the Cape Cod National Seashore, in North Truro, Massachusetts. The current tower was erected in 1857, replacing two earlier towers that had been built in 1797 and 1831. It is the oldest and tallest lighthouse on Cape Cod.

These are the geographical and historical data:

–Despite the closeness to his home, it seems to me that Hopper painted it only once, in 1930 (at least, I’ve only found this watercolour, aside of some previous pencil sketches):

Not far, either, from the artist’s home is Long Point Light Station; a small old lighthouse, located at the northeast tip of Long Point in Provincetown, Massachusetts. As a navigational aid, it marks the southwest edge of the entrance to Provincetown Harbor.

This is the precise light that appears in “The Long Leg”, one of his best known, most admired and most significative paintings:

Collection of the Huntington Library of San Marino, California, USA.

Eastern Point Light is another historic lighthouse on Cape Ann, in north-eastern Massachusetts.

The tower was rebuilt in 1848 and again in 1890. The third and current conical brick tower stands just 11 m. tall. The lighthouse has an attached two-story keeper’s quarters, built in 1879.

In 1880, the lighthouse was occupied by the great American painter Winslow Homer, who made its light beams appear on the distance in a some of his marine watercolours.

The very first of all the lighthouses that the artist depicted is Annisquam Harbor Light (also ’Squam Light), in the Annisquam neighbourhood of Gloucester. That watercolour, dating from 1912, was also one of the first outdoor paintings he made in America after returning from his last European trip.

Annisquam Harbor Light Station is on Wigwam Point, on the mouth of the estuary connecting this harbour on the north to Gloucester Harbor on the south, and is one of the four oldest lighthouses to surround the Gloucester peninsula as well as Eastern Point Light, Ten Pound Island Light, and Thacher Island Light (anyway, as far as I know, Hopper newer painted the last one; at least in a close, clear view.)

In spite of being a minor light in size and high, I think that Hopper liked it very much, in part because of a curious coincidence related to the recent history of the place: one Dennison Hooper was the keeper from 1872 to 1894, and his son Edward was born at the lighthouse in 1879. His name was publicly well-known in Ed Hopper’s time there, since this “other (or almost)” Edward Hooper related his witnessing of two schooners that went aground on Coffin’s Beach, across the mouth of the river from the lighthouse on 1888, when he was still a child (one of the ships was the two-masted I. W. Hine. The crew of the Hine got ashore without assistance, and the schooner was refloated.)

The second earliest lighthouse painted by Hopper (between 1916-1919) is another smallish one: Monhegan Island Light, in Maine. It was first established in 1824, but the present structure was built in 1850.

There are several watercolours from the 1920s that show lights in the background, or in the distance, sometimes difficult to identify.  Below is a far-away view of two (three??) of the lights around Gloucester harbor (from Ten Pound Island Light at the left –or centre?– to Eastern Point Light far away at the right, as it seems to me; but this might also be one of the twin towers of Tacher Island Light … I don’t know). In fact, I’m confused by this painting, because, if the light in the middle is Ten Pound Island Light, then the one in the left could only be Annisquam Harbor Light at the north side of Cape Ann.

Pemaquid Point Light is located at the entrance to Muscongus Bay, Bristol, Maine.

This light, small (and cute) as it is, features in one of the more exquisite watercolours that Hopper ever painted: plain, gleaming with the tidiest mid-morning sunlight, overflowing with grace and easiness and charm. I just love it.

Finally I present this other light unknown to me –and maybe unreal–, figuring in one of the several paintings Hopper titled with a hour of the day (all of them are as charming as personal and subjective in extreme).

Hopper composed 5 A.M. from his memory of ferry-boat rides taken from Long Island Sound up to Boston and back to Manhattan, synthesizing details of lighthouse, factory, and coastal landscape. So, this light (of which I have only found a relatively reliable reference: Ten Pound Island Light, near the eastern end of Gloucester harbour) might not represent any actual building, but just an idealized one, and the place could be equally imagined (even if inspired by the reference noted above):

–All geographical and historical information about the lights comes either from the Wikipedia or from some of the main references listed there: mainly “New England Lighthouses: A Virtual Guide”.

–As for the pictures of the paintings, they come in great part from the websites of the different museums and collections that own them (and stated below each picture here). Some others have been found in fine sites on American Art. As a matter of fact, I have dedicated many hours to search and find the best photographs available for the illustrations on this post, and then, even a longer time editing many according to the tone, saturation, brightness or contrast parametres I have esteemed best for Hopper’s different periods and painting techniques. My criterium and editions are of course subjective and, maybe, unreliable, considering that I have never been in the US and, so, never seen a single one of the original paintings shown here. But I have seen all the Hopper’s artwork kept in the Museo Thyssen-Bornemisza in Madrid, and in the C.T.B Collections, which have provided me with some worthy criteria. Furthermore, after looking carefully at dozens of reproductions of a particular artwork, one gets a fair idea of how it might actually look. — Li Fontrodona (2017)

No unauthorised copying or redistribution. All Rights Reserved.