Every day that British weather permitted, from September to early November of 1885, and again during all the summer of 1886, two little girls: Dorothy (‘Dolly’) and Marion (‘Polly’) Barnard, daughters of a good friend of the painter, had to leave their play, get rightly dressed and attired, and unwillingly pose for some ten minutes in a corner of their garden while Mr. Sargent hurried to paint them, taking profit of the right twilight just before sunset. Many a time they were out and posing, but the light proved unstable or inadequate and there would be “nothing doing”, much to the disgust of the girls.

Representing fugitive evening light, the artificial glow of the lanterns and its reflection on the children’s faces, the whites of their dresses and the flowers, was a very difficult task, and it became the main obsession for Sargent during those periods of his life. Finally he depicted very well indeed all the subtle effects of light and colours. No wonder that he considered this oil as his best work; and for many viewers –I for one– it is indeed:

Despite his final success and satisfaction, Sargent confessed he had only been able to approximate “the impossible colours” he watched, using well-learned shortcuts, like orange for the glow of the lanterns, peachy reflections for the skin tones, white, mauve and pinks for highlights in the dresses and dusky greens for the shadows. He wrote that the oil paints at his disposal were neither lively enough nor true enough to the real hues.

The title of the painting comes from the song The Wreath, by the eighteenth-century composer of operas Joseph Mazzinghi, which was popular in the 1880s:

Ye shepherds tell me, have you seen
My Flora pass this way?
In shape and feature beauty’s Queen
In pastoral array.
A wreath around her head she wore
Carnation, Lily, Lily, Rose
And in her hand a Crook she bore
And sweets her breath compose.

Sargent did many preliminary sketches and studies for this work, with several techniques, but this one, with oil paint, seems to me a great artwork in itself:

The following pencil drawings of the heads of Dorothy and Marion record the precise poses Sargent required for the girls’ profiles –they could be working designs as well, but they look more like done after the painting was ended: 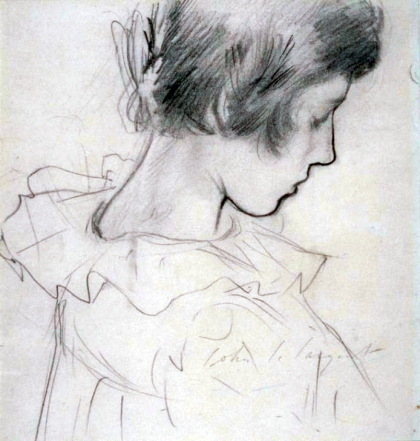 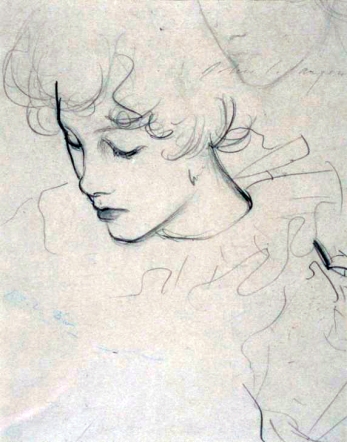 Again, like with my previously selected artworks for this series, I have not only considered its great beauty and originality, but the personal reminiscences it awakes in me; some “private” link –which in this case is the looks and relative age of the children represented: they were eleven and seven or eight years old in 1885, when Sargent began the work. (In fact, neither my younger sister nor I had white dresses at this early age, but I am quite sure we both would have worn a couple of them (a little more fashionable, if possible) and gladly posed for any painter in our own garden, one century after those kids did.)

Additionally, to my eyes, this work is one of the very best figure compositions ever made by any painter in the Impressionist manner; a most paradisiacal sight, impossible to forget.

As always, I hope you enjoy this masterwork as much as I do ✨ 🦄 .

Notes on the artist

John Singer Sargent (Florence, Italy 1856 – London, UK, 1925) was the only son of American parents. His childhood was spent touring Europe, mainly in Italy, France, England, Switzerland and Germany. He visited America for the first time in 1876, and did not stay long there –nor did come back often–, but he remained an American citizen throughout his life.

Sargent enjoyed an early international acclaim as a portrait painter, but it was not until the last decades of the 20th century that he received the recognition and praise as the formidable artist he always was.