Edward Hopper, born in 1882 in Upper Nyack, NY, began art studies with a correspondence course in 1899. Soon he transferred to the New York School of Art and Design, where he studied for six years, with teachers who instructed him in oil painting, watercolour and etching.

These two oils on cardboard from his first student years (when he was barely 20 years old) are really excellent. They reflect the influence of French master Edgar Degas, whom he admired, but display also a very personal style and a great economy of means –especially his “Nude Walking …”; with the figure depicted with a few brush strokes.

Very interesting too is the choice of such a dark and restricted palette (bluish greys on the first oil, and sepia on the second, aside from white) -although this could just be imposed or adviced by some of his teachers for pedagogical reasons.

The picture at the heading is an edited version of mine (cropped, colour-reversed and desaturated) of a later painting by the same artist: “Reclining Nude”, from 1927, which I bring here down in its original format and colours -and also in my favourite ones, as I have it printed and hung on a wall of my own bedroom-. 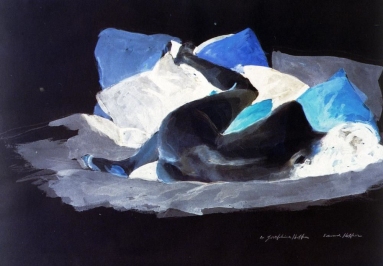 Reclining Nude – in its complementary colours

[This post is a follow-up of two previous ones on this American painter -and it won’t be the last-. You may find them here: Ari F’s views on some paintings by Edward Hopper and also here: reppoH desreveR – just for Ari’s sake]