Glances at the work of Paul Delvaux (II) – English Version*

Some ten or twelve years before the first (dressed) girls who watch departing trains -the majority of them- or arriving trains, in 1944, Paul Delvaux painted one of his most accomplished feminine nudes: La Vénus Endormie (The Sleeping Venus), which I show on the header of the post while it is photographed by a girl who could have come out of Le Voyage Légendarie (another work by the painter that you can see in detail in my previous post: “The quiet exactness of dreams”).

Aside of the waxing moon, the Greek temples with large columns and statues and the several women surrounding the sleeping protagonist (two of them flying above the summits in the background), we find here a manifest novelty: a skeleton standing up at the left hand side. This one is not the first included by Delvaux in his paintings and, in fact, the 1930s and fist 1940s were quite prolific on this juxtaposition of beautiful nudes and skeletons (even more nude, all things considered).

Another curiosity -constant in his works- is the mysterious gesticulation of so many women. These appear almost always either perplexed, as if sleepwalking (or also directly sleeping like here), or exclaiming who knows what (equally like here):

There appear also nude boys on Delvaux’s work (in this post I show two who could well be the same; and perhaps, the very painter as a young man; have a look at Hommage à Jules Verne (1972) below and La Ville Rouge (1944) just down here:

–L’Acropole (1966), Le Canapé Bleu (The Blue Sofa, 1967), Pygmalion (1939) and La Mer est Proche (The Sea is Close, 1965) depict variations on the motive of Venus lying on a couch or a bed, more or less surrounded, in different layouts, by other women standing in classic and/or modern architectural spaces, through which some train crosses -except in “L’Acropole”-. The lampposts are not lacking anywhere, however… Among all these paintings, the first one has the most exquisite illumination and colour, with a soft range of lavender blues and a Venus who certainly shines with her own light, so beautiful and charming: 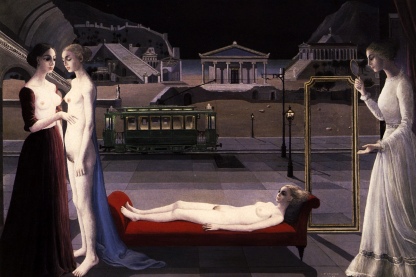 -In Le Jardin (1971) and in Rosine (1968) we may see some of the slenderest and most beautiful girls in the entire painter’s work, and also, for the first time in this little gallery of mine, there appear the “men in black”: abstracted scholars, dressed up with 19th century or early 20h century clothes, who walk away or just stand contemplating something they hold in their hands, absolutely apart from the feminine figures, buildings or other objects around them:

Paysage aux Lanternes (Landscape with Lanterns), from 1958, seems to me another work very especially remarkable; for its general composition, for the multitude of implicit crosses and many evocations of the Calvary, the austere chromatic range, the complex play of light and shadows caused by the moon (not visible, at the left) and thirteen lit lampposts with the help of nine open doors; altogether succeeding to create a very dreamy air -desolate and serene at once- and a highly mesmerizing effect. (This landscape has had me captive in contemplation for longer than any other painting in these posts, and this is saying much; it means many long periods!): 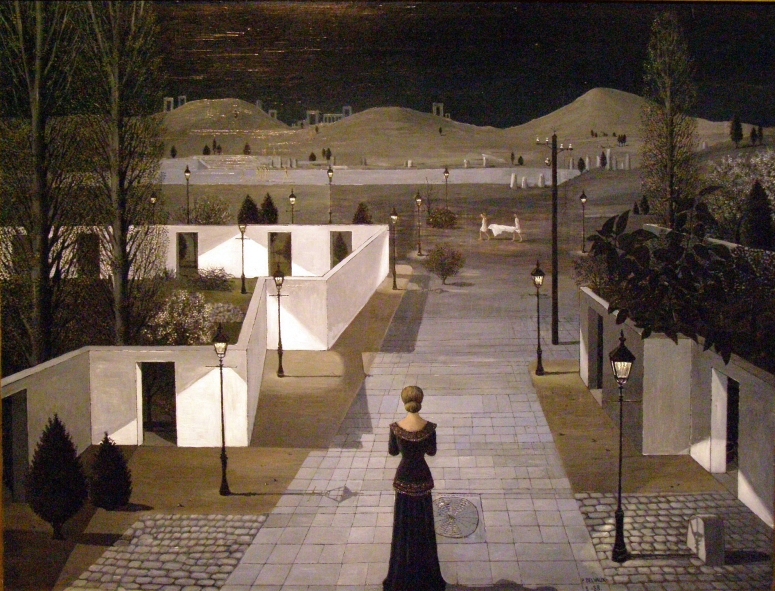 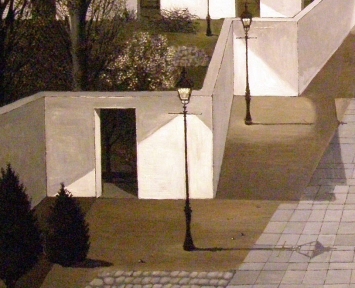 The sages and scholars that we often see in Delvaux’s paintings come out directly from Jules Verne’s novels and, in particular, from the pen and ink illustrations contributed by Jules-Descartes Férat or Édouard Riou to Hetzel’s splendid collection of “Les Voyages Extraordinaires” .

I have not revisited all these drawings in order to identify, one by one, the astronomers, geologists, etc. present in the paintings. I recognize only one at first glance: Professor Otto Lidenbrock from the “Voyage au Centre de la Terre“, who is certainly the most assiduous -it is featured at least in a dozen works if not more; always in the same posture, but each time scrutinizing something different -from an ammonite, as in the original illustration by Riou, through chunks of rock, to just nothing at all other than his bare hand… -.

Shown below is the original drawing by Édouard Riou for “Voyage au Centre de la Terre” (1864):

To conclude this second chapter and link it properly to the next one: The Geometry of Calvary; I think it’s pertinent to bring here a couple of the paintings full of skeletons (both are from the same year 1944, when Delvaux painted La Vénus Endormie -which might be precisely (so I guess) the woman we glimpse in the first of the works, well awake -but still with her arms behind her head-, standing up on the stairs, through the glass of the double door):